30%DISCOUNT
Home Software Windows Defender Vs. Avast – Which Is Better Antivirus for Windows

Windows Defender Vs. Avast – Which Is Better Antivirus for Windows

In today’s day and age, where the world is rapidly excelling in technology, and it has technically paved its way in every aspect of our lives. The threats on the flipside of this scenario are also increasing at the same pace. Malware or Malicious Software is a term accredited to any program that is created to cause trouble and disrupt an ongoing computer system. It is also a continually evolving eco-system given to the friction between security professionals and cybercriminals.

According to the data accumulated by Statista, almost a whopping 5 billion people were active internet users as the latest as of April 2020, taking up a full 60% of the global population. If you consider such high numbers for an internet-driven world, it is safe to say that “they are severely prone to get infected by more than 800 million types of different malware and viruses that have evolved and exist today”.

Despite the countless anti-malware measures taken to counter the situation, cybercriminals and hackers don’t give up easily, especially when there is money involved. Even though we have currently started a new decade of enhanced cybersecurity with 2020, hackers and cybercriminals have changed their techniques too to target vulnerable platforms.

Therefore, it has become extremely crucial to make sure that the necessary security precautions are in place through dedicated Antivirus software. And there are no two better names than Windows Defender and Avast that come to our minds for that.

As Windows Defender and Avast famously face-off each other for the position of the top Antivirus software and fight malware, all the same, let’s find out which one is best for your newly installed Windows.

Both Defender and Avast are considered to be not only proficient in terms of features and protection but accurate in nailing system security analysis to let the user know about potential threats. Although one cannot guarantee similarity in functionality and the process of how they both work. Mainly it is because of their protection, utility tools, and other additional protective services that they provide to their customers.

Because Windows Defender is a built-in feature when you install a Windows OS on a PC, you cannot uninstall or remove it. However, it automatically shuts down if you install third-party antivirus software like Avast.

Where Windows Defender Firewall is a complete package and the best security feature in Windows Defender, Avast offers a choice of different products for Windows and MacOS. The following are for Avast Windows:

According to a German authority AV-Test that was conducted in June 2019, all antivirus software was tested in three domains: protection, performance, and usability. Windows Defender, as expected, scored a perfect 6/6, while Avast was not far behind with 5.5/6. Therefore even by a slight margin, we can say that Windows Defender is better than Avast.

Antiviruses are not activated just when they are prompted. There is background activity involved or real-time scanning that performs the regular and routine check-ups. This real-time scanning is mainly responsible for eating up all the CPU performance. But as an avid internet user, you don’t have a choice when it comes to safety and security against online threats. Therefore antivirus software should be a perfect balance for conducting these basic scans and as well as ensure the stability of the system.

Experts say it is not worth it to spare the free antivirus software and buy one that slows down your computer. Good antivirus software, whether free or purchased, would provide excellent malware protection for your computer without compromising on the system performance. In the case of Windows Defender vs. Avast, the system performance tests were conducted on standard and high-end PCs for both the antivirus software. Given that Windows Defender showed a slower installation of frequently used applications on a standard PC by 44% to almost half of it with 20% for Avast, the latter ended up scoring better.

Comparing the user interfaces for both Windows Defender and Avast directly can show the user very clearly that which one offers a better experience.

Windows Defender Security Center serves as the main controlling dashboard for its various features and operations. The user is just required to click launch, and the clean interface comfortably provides screen space to understand what is going on. As you can see in the image below that the groupings on the left allow you to access the various modules. The user has a choice of running a variety of scans, whereas there is no option for scheduled scanning. 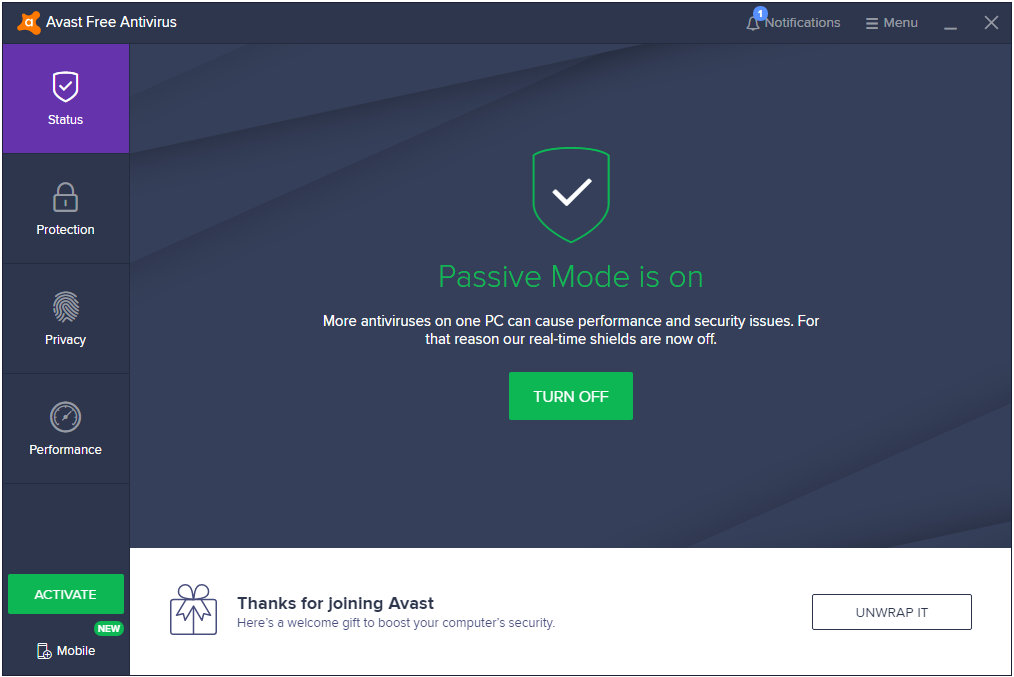 In comparison, Avast’s interface is even simpler. With natural dark colors, users don’t even need to be efficient at using computer software to use Avast to its optimum. As you can see below, the large green checkmark indicates that everything is okay with the system. However, it would turn into a red exclamation mark if there is a threat or vulnerability. In which case, a quick scan button right below it allows the user to scan the system right away. In addition to this, you can see a pane on the left that organizes the main functions and is simply divided into four categories to find dedicated options in the slots.

At this point, probably both Defender and Avast have had a pretty close call. If one gets on the other, in the next slot, the other catches up. But such is not the case when it comes to the plans and prices both offer. Both can be of various rates depending on the user’s budget and need for operations.

All in all, both the software are great with functionality, operation, and value for the freebie and freemium pricing. However, according to Avast’s recent policy changes, the software is allegedly selling user data. Many users would not find it comfortable to use the software, knowing that their personal data and information are at risk. Despite this, it is the user’s own choice to pick which one.

Author Bio: Amanda Jerelyn works as an IT Administrator at Crowd Writer, a reliable firm that offers services like do my essay and others. She is a single mother who has done her college major in computer science. Her keen interest in the field has earned her significant expertise over time.